FARMER’S PROTEST: NEW FARM LAWS SEEM DETRIMENTAL TO THE INTEREST OF THE CULTIVATORS 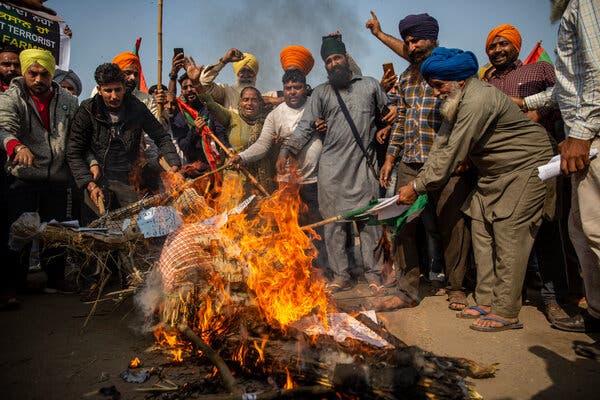 Agriculture is the backbone of Indian economy as roughly 70-75% of our nation’s population depends directly or indirectly on agriculture. It provides the basic ingredients to mankind and raw materials for industrialisation. Thus the nationwide unrest which is currently resulting from the farmer’s protest, is definitely something of grave concern. The 2020 Indian farmer’s protest is an ongoing protest, predominantly by farmers  of Punjab and Haryana, against the three farm acts passed by the Indian Parliament in 2020. According to the farmer’s union, the acts have been claimed to be “anti-farmer laws.” The farmer unions believe that the laws will allow the sale and marketing of agricultural products even outside the notified Agricultural Product Market Committee ( APMC) mandis for farmers. On top of that, the laws will allow interstate trade and encourage voluntary trading of agricultural produce. All these changes, the farmers believe, will ” gradually end the Mandi system” and ” Leave farmers at the mercy of corporates.”

In the year 2017, the central Government released model farming acts. Some time later, however, it was observed that a number of reforms suggested in that was not implemented by the states. Thus in July 2019, a committee consisting of seven chief ministers was set up to discuss the implementation process. Accordingly, the Central Government of India, promulgated three ordinances  ( temporary laws), in the first week of June 2020, which were later introduced as bills and passed by the Lok Sabha and Rajya Sabha. The President of India signed these bills on 28th September, thus converting them into acts.

• Farmers’ Produce Trade snd Commerce Act : This law widens the scope of trade areas of farmers’ produce from select areas to ” any place of production, collection and aggregation.” It also allows electronic trading of scheduled farmers’ produce and prohibits state government from levying any market fee, cess or levy for trade of farmers’ produce conducted in an outside trade area.

• Farmers’ ( empowerment and protection ) agreement on price assurance and farm services Act : This helps in creating a framework for contract farming through an agreement between a farmer and a buyer even before the production of any farm produce. It also ensures a three-level dispute settlement mechanism – the Conciliation Board, Sub-divisional Magistrate and Appellate Authority.

THE LATEST UPDATE ON THE MATTER :

Farmers from different states have been camping at Delhi’s several border points for two weeks now, demanding a repeal of the farm laws passed in September. Agriculture minister has urged union leaders to consider the proposals and he is ready for further discussion with them. Meanwhile the protestinf farmers have decided to observe a One-day hunger strike on 14th December, from 8a.m to 5p.m. This is a manifestation of their plan to intensify their agitation from December 14 onwards.